The specific awards to be presented on behalf of the Association shall include, but are not limited to the following:

Pharmacist of the Year

This award is presented to those pharmacists who went above and beyond their regular roles in providing exemplary service.

(i) Community Pharmacist of the Year

(ii) Hospital Pharmacist of the Year

This award may be presented annually to a member of the Association who fulfills the terms of reference laid down by the donor, viz. Exceptional service to the community through the profession of pharmacy. ALL nominations must be made on the prescribed form and must be proposed and seconded by members of the Association.

This award may be conferred upon any member of the Association who has been registered as a Regular or Supporting Member from the time of his/her first registration with the Association. The award shall take the form of a suitable scroll, and may not be presented annually, but at the discretion of this Committee and on final approval of Council. Members honoured with this award who wish to practice pharmacy must comply with all requirements as outlined in the Pharmacy Act, 2004 (Newfoundland and Labrador) and in the By-Laws of the Association, with the exception of the payment of Membership Fees. The criteria for selection of honorary life members shall be as follows:

a) Service to pharmacy via the Association through active participation in Council or Association committees;

b) An outstanding single contribution to the Association and/or a single achievement which enhanced the pharmacy profession in the Province of Newfoundland and Labrador; or

c) Long-term service in the pharmacy profession in the Province of Newfoundland and Labrador with a distinguished record.

This award is available to any member of the Association, an organization or group, or any person, in recognition of service that brings credit and prestige to the pharmacy profession. This award shall take the form of a suitable scroll, and may not be presented annually, but at the discretion of this Committee, who shall nominate appropriate persons, organizations or groups and make a decision for final approval by Council.

The nominee for this award should be a pharmacist who has introduced innovative methods or services into pharmacy care; or who has, by his or her initiative, broadened the scope of the practice of pharmacy in the Province of Newfoundland and Labrador. This award is meant to recognize pharmacists who, in their day-to-day practice, have raised the expectations of what the public can expect from their pharmacist.

This award is presented to a pharmacy student who exudes enthusiasm and passion for the future of pharmacy, is a visionary, involved in community volunteer work, and offers extraordinary promise to the profession. The nominee must be in good academic standing and enrolled in the MUN School of Pharmacy Program. Nomination submissions should identify activities, accomplishments, leadership and other ways in which this individual is contributing to the future of the pharmacy profession.

This award is presented to a student enrolled in the School of Pharmacy at Memorial University of Newfoundland who has made an outstanding contribution to the Pharmacists’ Association of Newfoundland and Labrador through activities with PANL as a volunteer, committee member or supporter. Nomination submissions should describe the characteristics that enable the nominee to achieve their contributions and identify activities, involvement, leadership and other ways in which this student has contributed to the activities of the Pharmacists’ Association of Newfoundland and Labrador.

There are two CPBA bursaries available annually, each valued at $500. 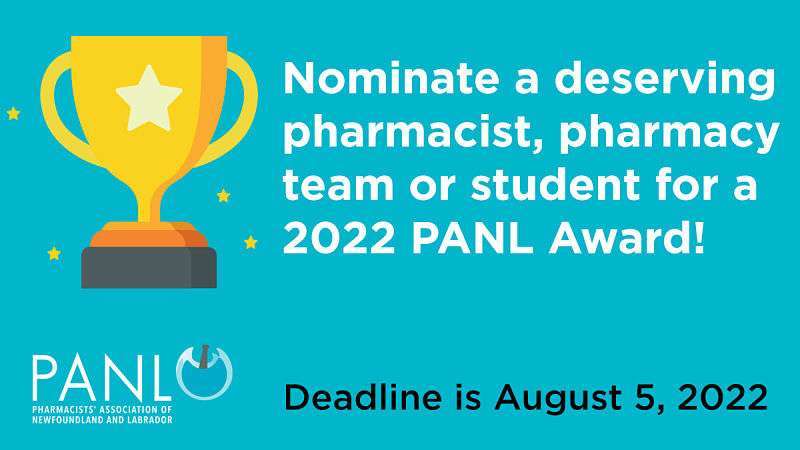 Pharmacist of the Year Nomination

Pharmacist of the Year Nomination